Withdrawal from the contract

Withdrawal by the consumer.

The consumer has the right to withdraw from the contract within a period of fifteen days. The period mentioned in the first sentence runs from the date of the contract is concluded and in the case of

the purchase contract, from the date goods were received,

a contract, subject of which is several types of goods or delivery of several parts, from the date the last goods were received, or

a contract, subject of which is the regular, recurrent delivery of the goods, from the date the first goods were received.

You can also withdraw from the contract via post at the address Servis LCD Daniel Heneberg, Partyzanska 2, 785 01 Sternberk, Czech Republic.

If the consumer withdraws from the contract, he sends or transmits to Servis LCD without undue delay and no later than fourteen days after the withdrawal, all goods received from Servis LCD, and at his own expense.

The goods should be returned by the consumer in full, with complete documentation, undamaged, clean, preferably including its original packaging, and in the condition and value as when the goods were received. If the returned goods are damaged or breach of duty of the buyer, the seller is entitled to the purchaser claim compensation for diminution in value, and credited him for reimbursement.

If the Buyer decides to withdraw within the stated period, it is recommended for the faster procedure of withdrawing deliver the goods to the address of Servis LCD together with the attached cover letter with a possible reason of withdrawal from the contract (not required), with the number of the purchase document and indicated bank account number, or mentioning whether the amount will be returned in cash, or whether it will be drawn in the form of Servis LCD Credit.

The Buyer responds to Servis LCD only for the reduction of the value of the goods that originated as a result of the handling with the goods other way than it is convenient with regard to its nature and properties.

If the consumer withdraws from the contract, Servis LCD will return to him, without undue delay and no later than a period of fourteen days after the withdrawal, all monetary funds except the cost of delivery (noting that the consumer has the right for the free delivery of the goods in selected situations) according to the contract, and in the same manner initially received.

In the case, that the Buyer has the full registration (name, surname, address and contact email) Servis LCD will return all received monetary funds, excluding the cost of delivery as special gift vouchers (Servis LCD Credits), which can be used according to conditions of the Servis LCD Credit service.

If the consumer withdraws from the contract, Servis LCD is not required to return the received monetary funds before the consumer gives or proves that he sent the goods to Servis LCD.

The consumer notes that if the goods were supplied as a gift, a gift contract between the Buyer and Servis LCD will be concluded with a condition that if it occurs to the usage of rights of the consumer to withdraw from the sale contract, the gift contract shall expire and the consumer is required together with the returning of the goods to return related gifts including everything, that he received. In the case that these will not be returned, all such values will be considered an unjust enrichment of the Buyer. If the issue of the subject of an unjust enrichment is not possible, Servis LCD has the right for the monetary reimbursement in a usual price.

Withdrawal in other cases

The Buyer cannot withdraw from the contract or demand the delivery of the new item, if he is not able to return the goods in the state in which he received it. This does not apply

If the Buyer does not report the defect of the goods on time, he will lose the right to withdraw from the contract. 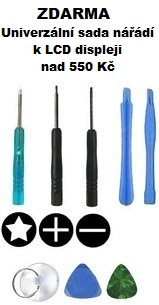